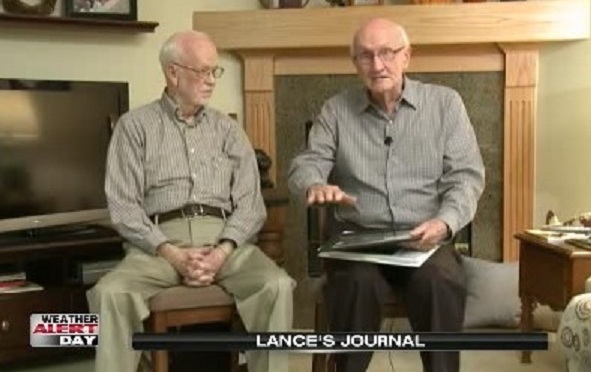 The French Legion of Honor medal is the highest honor that France can bestow upon those who have achieved remarkable deeds for France.

The award was established by Napoleon Bonaparte in 1802, and two brave Lincoln veterans now have the honor of wearing the French Legion of Honor Medal.

Private 1st Class Frank Chambers was a member of the Army’s 75th Infantry Division, “In the Battle of the Bulge the snow was this deep and the temperature was way below zero and we lost many more troops with frozen feet.”

1st Lt. Stan Hart was a fighter pilot in the Army Air Corp, “I have a copy of every mission. You know once you got back from a mission you were briefed immediately.”

Despite living just 5 blocks away from each other on the east side of Lincoln, these two French Legion of Honor Medal winners had never met before this day.

Frank describes what he did to earn the honor, “After the Battle of the Bulge was completed there was a break through down near the Swiss border. Hitler had tried to start something and they were running over the French Army so they sent my division, my 75th down to help out the French Army and in appreciation for being a part of that action they awarded a French Legion of Honor.”

This prestigious honor means a lot to Stan for a couple different reasons, “Knowing that there’s a limited number of these and I guess just the fact that started by Napoleon. It’s kind of a humbling feeling I think.”

CHECK OUT THESE PAGES…